The Meals Ready-to-Eat – commonly known as the MRE – is a self-contained, individual field ration in lightweight packaging originally bought by the United States military for its service members for use in combat or other field conditions where organized food facilities are not available. The MRE is used throughout the world in military establishments.

After repeated experiences dating from before World War II, Pentagon officials ultimately realized that simply providing a nutritionally balanced meal in the field was not adequate. Service members in various geographic regions and combat situations often required different subsets of ingredients for food to be considered palatable over long periods. It is this factor that resulted in Serac investigating options for the African and Middle Eastern markets which have different tastes to the American palette.

Moreover, catering to individual tastes and preferences encourages service members to actually consume the whole ration and its nutrition and this is the main reason for the rations being tailored for local taste profiles.Service members (who were classified as highly active men between the ages of 18 and 30) typically burn about 4,200 Calories (kcal) a day, (17400 kj) but tended to only consume about 2,400 Calories a day during combat, entering a negative energy balance.

This imbalance occurs when service members fail to consume full portions of their rations Although manipulations to the food items and distribution of macronutrients to help boost the amount of kilocalories per MRE have been made, more studies are showing many service members still do not meet today's standards of daily consumption, often trading and discarding portions of the ration. Researchers continue to study the habits and eating preferences of service members, making constant changes that encourage service members to eat the entire meal and thus get full nutritional value. 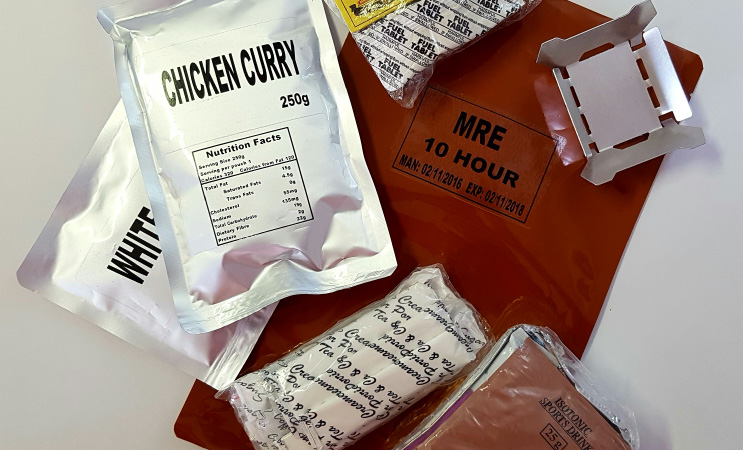 Each Ready to Eat Meal provides about 1,200 Calories (1,200 kcal or 5,000 kJ). They are intended to be eaten for a maximum of 21 days (the assumption is that logistics units can provide fresh food rations by then), and have a shelf life of three years (depending on storage conditions).

Packaging requirements are strict. MREs must be able to withstand parachute drops from 380 meters, and non-parachute drops of 30 meters. The packaging is required to maintain a minimum shelf life of three and a half years at 27 °C, nine months at 38 °C, and short durations from −51 °C to 49 ° must be sustainable.

Each MRE weighs 510 to 740 grams (18 to 26 oz), depending on the menu. Since MREs contain water, they weigh more than freeze-dried meals providing equivalent calories but this format was found to be more convenient as the food did not require extended periods of heating to infuse the water back into the pack. 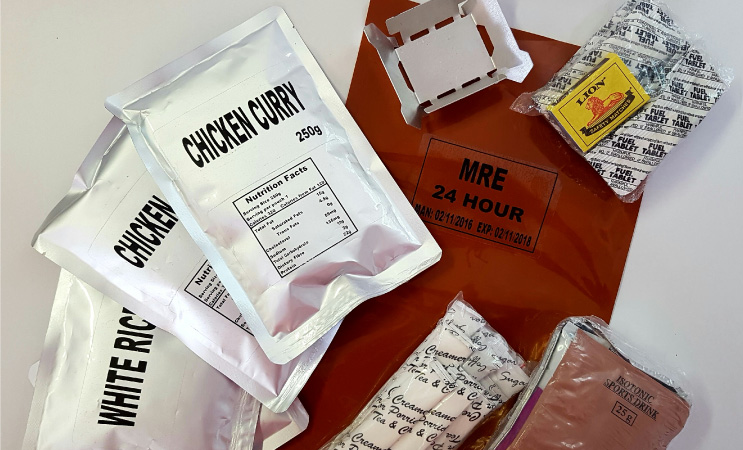 The 24 hour ration pack is formulated to provide 4000 calories (4000 kcal or 17000 kj) and follows the traditional breakfast, lunch and dinner format with a range of beverages and snacks to compliment the main meals and to ensure maximum consumption to prevent energy loss by end users.

A typical pack would include porridge for breakfast, tea or coffee, crackers, cheese and biscuits. The main meal would have an entrée and a side with a dessert of an energy bar or fruit or jelly

The evening meal would also include a soup, an entrée and a snack with tea and coffee to follow.